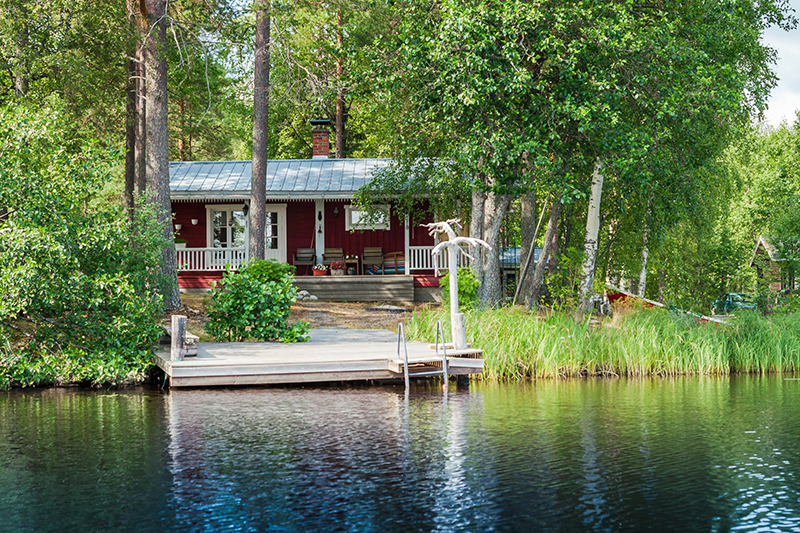 When you’re away from your home, you want to have peace of mind that your place will be fine. But what if the furnace stops working at the cabin during winter? Temperature sensors can alert you to extreme conditions and keep you from costly damages and loss.

High/low sensors detect temperatures that go too low as well as too high. These are programmable and the low side is typically set a few degrees below your normal temperature to alert you when a furnace problem occurs. They can also detect when a furnace remains on too long or a fireplace malfunctions, resulting in a dwelling getting warmer than it should be. These sensors are appropriate for second homes, cabins, or for homes of those who head south for the winter.

Smoke detectors are designed to detect the presence of smoke. Photoelectric smoke detectors as part of a monitored security system trigger when the inside chamber has been filled with smoke for a period of time. They are best at detecting fires in the 2nd (smoldering), 3rd (flame), or 4th (heat) stages of a fire.

Electric smoke detectors use ionization to detect the first stage (incipient stage) of a fire. They tend to go off when something is burning on the stove. Because these detectors are prone to frequent false alarms, many people remove the batteries or disconnect the alarm, leaving them vulnerable in the case of a fire.

When a monitored smoke detector goes off or malfunction occurs, your system immediately alerts the monitoring station, who will contact you and the fire department (if fire occurred). According to the National Fire Protection Association, “Three out of five home fire deaths resulted from fires in properties without working smoke alarms.” No matter what kind of smoke detector you have, make sure it is in working order and check it regularly!

Should I get a smoke detector or a heat sensor?

While a heat sensor detects high heat levels and catch fires as the temperature rises over a period of time, a photoelectric smoke detector will also detect smoke. Heat sensors may be more appropriate in attics, garages, woodshops, and dusty environments. They trigger when temperatures reach 135 or 200 degrees.

Whether you want to protect your regular residence or a second home such as a cabin, monitored environmental sensors will alert you to extreme temperatures or fire. For a free security analysis, contact us today!

A Testimonial from Lisa in MN:

“My daughter was downstairs and texted me that the stairwell in our basement smelled like gas. I just assumed it was sewer gas because those pipes can get dry and can smell bad. But maybe 10 minutes later the fire alarm in the house went off. I went to my keypad and it said fire. When it’s gone off before, it’s been a carbon monoxide alarm so I was expecting that alert, but it said FIRE! My daughter heard the alarm downstairs as well and yelled “Mom, there’s a fire in the bathroom!” I went straight for the fire extinguisher and went downstairs and put out the fire. While I was doing that, the monitoring station had called the fire department and contacted my husband because he is number 1 on our contact list. Thankfully, we caught it quick enough that we didn’t have a lot of damage – we just had to replace some sheet rock and the fan unit that caught fire. We’re so thankful to have a monitored system with Heartland Security! We were home and didn’t even know about the fire.”